As I have said before I am a big fan of Sam's club, Costco and BJ's.  One of the biggest reasons is at Costco and Sam's club you can get rack of lamb and lamb chops (from Australia) for a mere pittance of what it costs at the local grocery store.  Oh sure, if I was able to buy a whole lamb and have it butchered it might be cheaper...but for that I would need a bigger freezer which I don't have.

Anyhow, recently I broke down and bought a package of two racks of lamb at the local Sam's club.  I decided that this would make a fabulous Shabbas dinner for Ken and I.

But I have to tell you that rack of lamb or lamb chops always reminds me of my friends Janet and Vivian.  Both are adventurous travelers and a real kick to join!  We're always laughing and having the best time together. 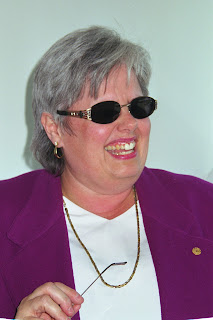 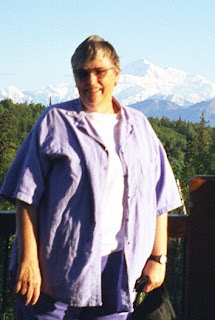 Viv on the left, Janet on the right
Janet retired about 10 years ago, after 30 years of working for the city of Anchorage.  She wasn't about to sit around in a rocking chair, she was much too young for that.  So she took a summer job working for Princess Cruises.  Thank you Janet!  We have reaped so many rewards of her job as her friends over the years.  Vivian's been on several cruises with her.  I went on a cruise with her back in the spring of 2001, during which we visited Puerto Rico, went through the Panama Canal and up to Costa Rica on the Pacific side.  Janet, Viv and I, have also had many fun trips to some of the Princess lodges in Alaska.

One of my fondest memories was a weekend we took a room at the Kenai Princess Wilderness Lodge.  See it here at http://www.princess.com/learn/destinations/alaska/highlights/wilderness_lodges/kenai/index.html

Janet arranged it so we had a cabin right next to the hot tub.  This was a real bonus as it was mid-January, the temp was -5F,  and we couldn't think of a better time to go hot-tubbing!  After chasing out some raucious kids by playing Dean Martin music on OUR little boombox, we laughed and joked about our frozen hair as steam rose around us in that marvelous outdoor hot tub!  If you've never hot tubbed in minus farenheit weather then you haven't lived a full life!  What a time we had!  After a good long soak we ran back to our cabin and dressed for dinner.

On the menu that night was a lamb chop smothered in mustard and rosemary.  Well, that was something I had never had, so of course I had to be adventurous and order it.  Oh, what a delightful dish that was!  I was over the moon for the rich aroma of the lamb joining the fresh resiness from the rosemary.  The heat of the mustard hit my tongue and made a wonderful unforgettable combination!

The rest of the weekend we ate in the cabin, having brought all manner of goodies with us.  I'm glad we did, because I kept savoring that meal in my mind and developing the recipe based on what the waiter said, and what my tastebuds told me about the ingredients.  We also couldn't afford to eat at the restaurant every nite of our visit!

So this past Friday I made sure I had plenty of my latest batch of Nut Brown Ale mustard, picked a few big branches of rosemary from my herb patch out back and started.

Click here for the recipe for the mustard: http://brewmaven.blogspot.com/2009/11/nut-brown-mustard.html.  If you don't want to make your own mustard you can use any mustard you like, but a nice whole grain, or a brown mustard goes very well! 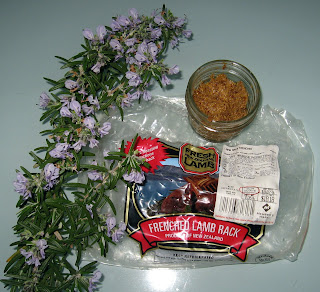 Make sure the lamb is dry. 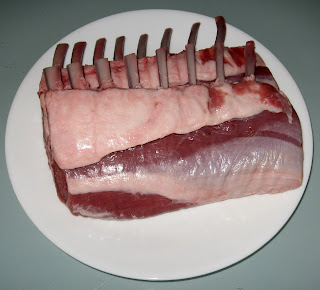 Strip several branches of rosemary of their leaves and chop very fine.  I had about a 1/2 cup of chopped rosemary.

Roll the lamb in rosemary leaves, coating evenly all around.  Sprinkle with a bit of sea salt. 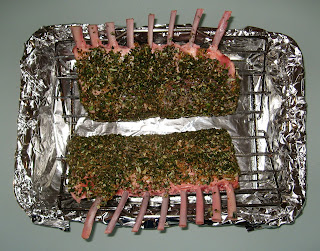 I baked these racks in my convection oven at 350 degrees and used a Accurite probe thermometer to cook them to a temperature of 155 degrees.  Lamb should be cooked to 160 degrees for rare, but remember that meats continue to cook once removed from the oven.  According to Emeril Lagasse the meat will cook another 5 degrees after being removed from the oven.

Ken's plate
We had our rack with boiled turnips, corn, salad, and homemade challah (egg bread).  The challah had been in the freezer for a few months, but because I bake using the "Artisan Bread in 5 Minutes a Day" method...it still tasted fresh as the day I baked it when I warmed it up.  I added cantalope for dessert. 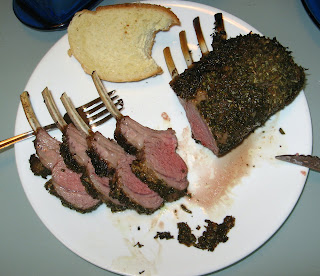 My plate
What a fabulous way to bring in Shabbas!  If we had gone out to a restaurant for this dinner it would have cost us $75-100 for two dinners.  I paid less than $19.00 for the rack of lamb, which carved into 8 lambchops each.  All totalled our dinner cost less than $22.00 for the two of us!  Although I will say, at a restaurant we wouldn't have to do our own cleanup! LOL!

Thanks Janet and Viv for the added great memories!
Posted by Ezzie at 10:07 AM 1 comment: Links to this post

Borrowing from other and homemade birthday presents

Thank you Michelle at:
http://www.bigblackdogs.net/2010/04/potato-chip-cookies.html

You may well wonder why those two things go in one blog...easy to explain!

Last weekend was Wayne's birthday and I was so bogged down with a political discussion group meeting at our house (thank you Todd Platts, PA Representative for coming!) and school and work, that I didn't have time to remember it was Wayne's birthday!

But I did remember that he really loved a Pecan Sandies recipe I had made a few years ago.  It was an unusual but very good recipe that included crushed potato chips as one of the ingredients!  My sister had given me the mix nicely packaged in a canning jar.  I simply followed the instructions, made them and shared them with several neighbors, including Wayne.  Then awhile later Wayne wondered if I had anymore of them, he really liked them!  I didn't at the time and because the dry ingredients were all mixed up in the canning jar, the recipe only said what the measurements were for the wet ingredients and directions went from there.

Last week I was checking out Michelle's site http://www.bigblackdogs.net for the latest HBin5 bread braid blogs and feeling sad because I hadn't had time to participate in the April 15th bread braid.   Michelle is a great leader of this wonderful group of bakers.  We bake recipes from Healthy Bread in 5 Minutes a Day by Jeff Hertzberg and Zoe Francois 2 times a month.  It will take us 2 years to go through the entire book.  You should check it out for some great interpretations!  http://www.bigblackdogs.net/2009/10/announcing-hbinfive-new-baking-group.html

Getting back to the cookies lo and behold, there was the recipe for the Pecan Sandies using potato chips.  Michelle calls them Potato Chip cookies, I still call them Pecan Sandies, and Wayne calls them delicious!

But when I told Ken to keep his hands off the potato chips that they were for Pecan Sandies he looked at me like I was crazy!  "You can't use potato chips in cookies!" he said with a snort.  I smiled and said "oh yes, I can, and you will love them...matter of fact you had them 2 years ago and loved them."  He still didn't believe me and made several other comments.  I just shined him on...I know what I know.

So after a morning of volunteering with "Comcast Cares Day" (April 24th) during which we cleaned up, mulched, and painted over at Sunset Park in Dover, PA, I made two batches of the "potato chip cookies", aka "Pecan Sandies."

This is a great recipe to make with your children by the way, or grandchildren, or as a project with a scout troop, etc.  Have the child(ren) smash up the potato chips with all the gusto that they can!  What kid wouldn't love that?

I won't put the recipe here.  Instead follow this link to Michelle's blog for that!

Below are the pics of the results...by the way Ken LOVES these and was happy to eat his words...literally!  LOL. 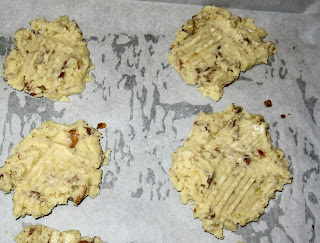 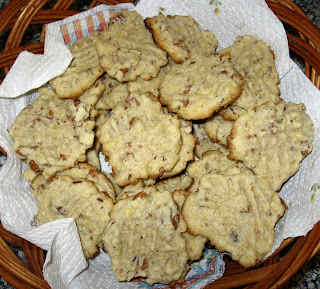 Who wouldn't love this basket of cookies for a birthday present, belated or not! 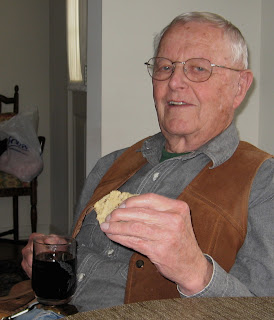 Wayne immediately heated up a cup of coffee and sat down to enjoy his present.
His wife, Wanetta, didn't wait...she just dipped her hand in the basket grabbed one and started eating!  LOL.
Posted by Ezzie at 8:05 AM 1 comment: Links to this post

Ezzie
York, PA, United States
Hello! I'm so glad you stopped by to visit! Please enjoy my recipes and let me know if you have any questions!